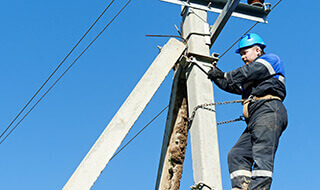 How to Become a
Lineman

Do you like to work with your hands and are you currently seeking a job that will utilize your mechanical and physical abilities? If so, then a career as a Lineman might be for you. Continue reading to find details about the education, skills and training you would need in order to begin working as a Lineman.

What Does a Lineman Do?

Strong knowledge of electricity and electrical tools are crucial for a Lineman. Common Lineman duties and responsibilities include:

The most important skill set for a Lineman is technical-based. They must have an understanding of electrical and power equipment and knowledge of electrical currents, voltage and resistance. They also need to possess strong analytical and problem-solving skills, particularly when assessing power cables for repair or replacement or troubleshooting defective equipment. Strong communication skills are helpful, as a Lineman might have to interact with other contractors as well as management, in addition to creating necessary reports for their company. It is essential that a Lineman have the ability to work outdoors in all types of weather conditions and to complete tasks with little or no supervision.

Other key Lineman skills include:

How Do You Become a Lineman?

After studying online job postings, we have found that most employers require candidates for Lineman jobs to possess a high school diploma or equivalent. Some technical colleges offer Lineman programs, typically resulting in a Certificate of Achievement, but for the most part on-the-job training and apprenticeship programs are most common in this field. A two-year degree in electronics or electrical contracting can be helpful, but is not required.

Apprenticeships combine hands-on training with instruction, usually conducted through the worker's union. Apprentices will work under the tutelage of a Senior Lineman, with the apprenticeship lasting as long as three years.

There are no licensing or certification requirements to become a Lineman. However, employers will typically require that job candidates possess a CDL license to operate large utility trucks. They might also be asked to produce a physician's certificate showing that they are physically fit to perform the manual tasks of a Lineman.

Job growth for Linemen is projected to be 11 percent during the 2014-2024 decade, as stated by the Bureau of Labor Statistics. With the continued growth of new housing communities and business developments and expanding cities and suburban areas, Linemen will be needed to install and maintain power lines. The retirement of older Linemen will also provide opportunities. Of course, any decrease in new construction would negatively impact this potential growth rate.

A quality resume is a helpful tool you can have when conducting a Lineman job search. Our library of Lineman resume samples can give you an idea on how to craft an effective resume.

After successfully completing your resume, search online for Lineman job opportunities. Draw on your network of professionals you might have met while gaining experience through an apprenticeship.

Insights from a Lineman

For a closer look at how to become a Lineman, we talked to Heidi Smith, an administrative assistant for the Joint Apprenticeship and Training Committee of the Northwest Line Construction Industry (NW Line JATC). NW Line JATC is a non-profit organization that trains union workers in the duties of a Lineman. Following is our question-and-answer session with Ms. Smith.

What is the common career path for a Lineman?

They will need to attend a state-registered apprenticeship which consists of 7,000 hours of on the job training. This apprenticeship takes about 3 1/2 to 4 years to complete and leads to journeyman lineman status.

There are a few ways to get started in the apprenticeship. The two most common would be attending a lineman school, also known as a pre-apprenticeship school, or signing the books as a groundman and gaining work experience.

A lineman school gives people the knowledge and understanding of what a Lineman does before applying to an apprenticeship. They will learn how to climb poles, how to use the tools of the trade and learn day to day tasks of a Lineman. They are short term, ranging anywhere from 10-15 weeks. There are several lineman schools out there and they are not a requirement to apply to the apprenticeship but they are a good start.

Signing the books as a groundman is working under a journeyman Lineman and working on a line crew and being exposed to what Lineman do.  You do not climb, you basically are handing tools and doing manual work but being around a Lineman helps understand what they do.

What should someone consider before becoming a Lineman?

They should consider the travel that is involved as an apprentice.  During their apprenticeship they are required to obtain so many hours in certain categories and to get those hours you will be required to travel within your jurisdiction.  For our apprenticeship we cover all of Washington, Oregon, Northern Idaho and Northern California.  So, an apprentice should expect to work in any part of that region to get the hours required.  They should consider that they will be working at high heights and around power lines as well.

What type of person excels at this job?

Someone that is hard working, pays attention to detail and understands the importance of following safety rules and procedures.

How Much Do Linemen Get Paid?

Linemen in the following states make the highest median hourly wage in the U.S.

Use the following resources we've put together to help you find more information about a career as a Lineman.

Bevins Blog
Hosted by a manufacturer of electrical utility products, this blog provides various stories focusing on the job of a Lineman, safety news and more.

Powerlineman Magazine
Touted as the "only magazine built by linemen, for linemen", this online publication provides articles as well as networking opportunities for those in this trade.

National Electrical Installation Standards (NEIS)
From overviews of installation methods and safety guidelines to webinars and online courses, Linemen can find relevant information that is related to their profession.

National Electrical Manufacturers Association (NEMA)
Established in 1926, NEMA provides Linemen with a site where they can read about power line equipment and systems, review occupation standards and access online publications.

The Lineman's and Cableman's Handbook 12th edition
From how to climb poles to reading electrical drawings, this comprehensive guide covers everything you would need to know as a Lineman.

The Field Guide for Powerline Workers 1st edition
Covering best practices in the field, this book addresses the installation and maintenance of electrical power lines in addition to providing information about OSHA safety guidelines and tips to control job hazards.

Sources for this article include the Bureau of Labor Statistics, online job postings and other online sources.