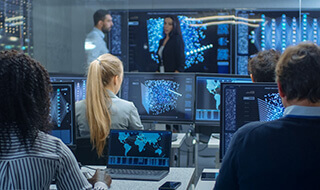 How to Become an
Intelligence Analyst

What Does an Intelligence Analyst Do?

Some common Intelligence Analyst duties and responsibilities include:

The ability to obtain, process and provide information are three of the most important skills an Intelligence Analyst will be expected to do. Being an Intelligence Analyst involves observing and receiving data from relevant sources, working with the data to break it down into separate parts and compiling reports that allow to understand the risks associated with various groups and individuals. Intelligence Analysts should be to think, speak and write clearly and succinctly. They should be able to desegregate significant data from large bodies of data they obtain and create and maintain a systematic recording and filing system that allows for cross-referencing of intelligence data obtained.

Other key Intelligence Analyst skills include:

How Do You Become an Intelligence Analyst?

According to our analysis of online job postings, employers are looking for Intelligence Analyst candidates who have at least a bachelor’s degree. Degree programs for those interested in becoming an Intelligence Analyst include political science, international studies and national security. Previous experience in law enforcement, the military, computer science or accounting is often helpful. The candidate’s ability to speak more than one language is also considered favorable by employers. Government agencies that employ Intelligence Analysts may require candidates to participate in additional, specialized training. In addition, internships that provide a learning experience on how intelligence is gathered and processed can be helpful.

Demand for Intelligence Analysts is developing at a slower-than-average rate. The Bureau of Labor Statistics forecasts a 4-percent growth for the position through 2024, amounting to a total of 33,100 job openings for Intelligence Analysts during that period. The projected job openings in the government sector will be more suited for those who are at least bilingual and have military or law enforcement experience.

Once your resume is ready, search online for Intelligence Analyst job opportunities. As you search for openings, be sure to leverage your professional network, including people you worked with in the military or law enforcement fields.

When applying for Intelligence Analyst positions, create a cover letter that expresses your interest in the position and highlights your qualifications and what you can bring to the role. Need some inspiration for your cover letter? Check out our collection of cover letter samples.

In order to get an inside look at how to become an Intelligence Analyst, we talked to Dmitri Oster, who has an extensive background in international affairs and associated disciplines. Here’s what he had to tell us.

What Is the Common Career Path for Intelligence Analysts?

There are many paths available for a person to qualify as an intelligence analyst. Any given applicant must be very well-read, intelligent and with a deep knowledge base for all types of civil and worldly affairs. Any such applicant should also not have anything resembling a criminal record as background is thoroughly examined and judged according to various national security guidelines. Some people in this industry would say that a typical intelligence analyst would come from an academic background in political science or international affairs or something associated with such fields of study. And, many who enter this field do come from such an academic background. However, it is important to know that other backgrounds are considered when one is attempting to enter this professional domain.

What Career Advancement Opportunities Are Available to Intelligence Analysts?

There are options available to ascend to higher levels of managerial oversight or supervisory status within both the governmental and even private sectors of industry. The abilities required to collect, analyze, and think through complex sets of data while rendering an intelligible product in a timely and efficient manner to consumers is a skill-set that is highly regarded in upper levels of practice in both the intelligence and private sector domains. There are some intelligence analysts that even choose to enter the political domain with their gained understanding of the intricacies embedded in political phenomena. Although, that is always only a personal career choice with a very different set of priorities and orientation. It is fair to say that an intelligence analyst would most likely have a different set of eyes to be able to interpret and help inform their viewpoints on political and even business matters, should the need arise.  I refer to this simply as the creative impulse, and harnessed in a productive manner it can lead to success in various fields of operations.  Good intelligence analysts often emerge from this backdrop of functioning.

Who Makes a Good Intelligence Analyst?

People who excel in this type of job are those that have a penchant for detail and can follow various protocols, but also have a developed sense of critical inquiry. Any type of intelligence analyst without a critical consciousness is simply following regulations. The best analysts are those that can work within complex guidelines but also are not afraid to think and question beyond the standard parameters of inquiry.

What Should Someone Consider Before Becoming an Intelligence Analyst?

First and foremost is the question of emotional and behavioral stability. It is important to consider this domain and dynamic of human functioning because most intelligence analysts must have the refined abilities to multi-task with a keen sense of focused attention and detail-orientation while at the same time having the capacity to see the bigger picture of any particular project.  This is the ability to see and perceive on different levels at the same time, while not being burdened by distraction and other forms of stimuli that are always present. I firmly believe that only those analysts and other operators that have spent a good amount of time on their emotional development have the capacity to carry out these functions in the most efficient and mature manner.

How Much Do Intelligence Analysts Get Paid?

Intelligence Analysts in the following states make the highest median hourly wage in the U.S.:

Need more information? We put together this list of extra resources to assist you as you continue exploring a career as an Intelligence Analyst.

CIA
Office of Intelligence and Analysis