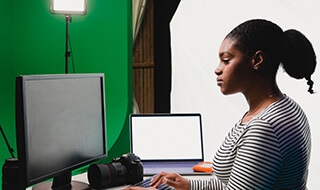 How to Become a
Lighting Designer

What Does a Lighting Designer Do?

While the specific skills that a Lighting Designer needs varies depending on industry, all Lighting Designers must be creative thinkers. The primary function of their job is to use light creatively in order to create a certain ambiance for a room or production. This involves applying technical knowledge of the four properties of light, which are color, intensity, distribution, and movement. Lighting Designers also need good computer skills to master the specialized CAD software used to bring their visions to life. Some typical duties of a Lighting designer include:

First and foremost, a successful Lighting Designer is an expert in the four properties of light. With that being said, this is a field where technical knowledge can only carry you so far. A successful Lighting Designer has the ability to be a big-picture thinker, which allows them to see how each lighting component fits into the overall aesthetic of their project. They must also have the attention to detail necessary to implement their vision and tweak it until it’s perfect. A good Lighting Designer is also great at working with others. For those who chose the residential or commercial route, this means working closely with the architect on any given project. Those who chose the Entertainment route work closely with the set designer and lighting crew to develop and implement a lighting plot that enhances the emotional impact of the production.

Other key Lighting Designer skills include:

How Do You Become a Lighting Designer?

Coursework for a Bachelors in Lighting Design consists mostly of learning the properties of light and strategies for manipulating these properties to create a desired effect. It also includes multiple courses on VectorWorks, which is the industry-standard CAD software Lighting Designers use to bring their designs to life.

Although the National Bureau of Labor Statistics has no specific data for Lighting Designers, the demand for Set and Exhibit Designers is set to grow 10 percent through 2020. Most of the job growth in this field will be concentrated in areas with thriving theatre and museum districts.

The next step is to search online for job opportunities. Make a note of which skills are listed in the job description as desirable, and then tweak your resume accordingly.

The final step is to make sure your cover letter is tailored to the specific job you’re applying for. Check out our Lighting Designer cover letter sample before you apply.

Insights From a Lighting Designer

We wanted to give you a first-hand account of the Lighting Designer career path, so we had a conversation with Brandon Eckstorm, Spotlight Product Planner at Vectorworks, Inc. Before joining Vectorworks in 2015, Brandon amassed 10 years of experience as a Lighting Designer. Here’s what he had to say.

What is the common career path for a Lighting Designer?

There are two ways to become a Lighting Designer. The first is the more traditional pathway. You go to college to get a degree in theatrical lighting design or general lighting design. Throughout your school years, you volunteer for stagehand calls, load ins, load outs, and work your school’s shows and outside shows even to build your experience. Once you graduate, you go to more stagehand calls or intern at a design house and pay your dues. Eventually, you’ll work your way up from Assistant Lighting Designer (ALD) to Master’s Electrician to being a Lighting Designer. The alternative career path is foregoing college. It can definitely be a harder choice, but just as rewarding.

You would start right out of high school by volunteering to do stagehand calls. To succeed with this choice, you have to be willing to be the person who is always staying late and willing to do the grunt work. You’d follow a similar succession path from Stagehand to Master Electrician and eventually to Lighting Designer. While it might take you a few more years to advance compared to the college-route, you will get there if you’re willing to put in the work. If you know you want to be a lighting designer, there’s nothing wrong with going straight into the industry out of high school to avoid the expensive price tag surrounding college education.

One thing to note, is that no matter what path you choose, there is one hard fact: you have to be willing to work hard. Volunteer for every opportunity possible and soak up every last piece of knowledge from your peers, professors, and supervisors. If you aren’t willing to hustle, you won’t make it in the lighting design industry.

What should someone consider before becoming a Lighting Designer?

Before becoming a Lighting Designer, you should know that it’s not all glamour. Not only is the path to becoming a Lighting Designer full of hard work, but also once you become one, the grind isn’t over. You have to be willing to work long-nights and weekends. It’s not uncommon to work 18 hours. While I can’t guarantee you’re going to get a lot sleep, it’s worth it, as there is no greater joy in life than watching tens of thousands of people go crazy anytime you hit a lighting cue. Especially if you cue with the band during a live performance, you’re the surprise element that really takes things to the next level. You feel a part of the band. When you produce those “oohs” and “ahhs,” it truly is an indescribable feeling.

Additionally, you need to know that technology is your best friend. There’s always a new networking protocol, operating system, or software that you’ll have to learn. You have to be constantly eager to continue your learning, as it will make your job so much easier in the long run. For example, if you think you can get away without using drafting software, you’re wrong. You might be able to swing simple shows with hand drawn paperwork, but once you do a professional show, you’ll quickly realize the importance of your organization onsite. Design software like Vectorworks Spotlight 2017, makes paperwork a breeze and will save you hours of time. So, I suggest you learn to adopt a technology-driven workflow early on, even if you aren’t working big-time shows. My best piece of advice is to treat every show the same. A six or eight light production is the same as an 800 or 6,000 light show. The only thing that’s different is the number of instruments.

What type of person excels in this job?

People who have a strong work ethic will excel as a Lighting Designer. And, not only do you have to be willing to always put 110 percent into everything you do, but it’s also important that you’re a decent human being. As I mentioned earlier, you’re going to be spending a lot of time with your coworkers, so you need to be able to get along with others.

What are some of the most important skills for a Lighting Designer to have?

Lighting Designers have to be technologically savvy, as they have to operate various tools such as Vision previsualization software, along with lighting consoles, drafting software and more. It also helps to have a decent free hand for when you do sketch out your ideas. As for soft skills, you have to have vision as you’ll need to be able to see how your drawings will translate to the stage. On top of the skills previously mentioned, you need to be very flexible. You’ll have to adapt to shows on the fly, and stop-drop-and-travel to tour with your shows.

What do you find to be the most rewarding aspect of being a Lighting Designer?

The second-best feeling is seeing the show you planned come to life, but the absolute best part about being a Lighting Designer? Hearing, witnessing, and experiencing the crowd’s reactions to the effects you’re producing.

How Much Does a Lighting Designer Get Paid?

The following are the states with the highest median annual salary for Lighting Designers in the U.S.

If you want to know more about being a Lighting Designer, then use this list of resources as a starting point.

Archlighting.com
Archlighting is a blog that covers all things architectural lighting. It features industry news, strategies and interviews with industry experts.

Light-ca.com
This is another blog that features spotlight interviews of those in the Lighting Design industry. This is a great site for those looking to go into Architectural or Landscape Lighting Design.

LightDirectory.com
Lighting Directory is an online hub of resources for those who work in the Lighting Industry. It contains a great variety of resources helpful for all types of Lighting Designers.

International Association of Lighting Designers
Founded in 1969, this Chicago-based global organization is dedicated to fostering excellence in the Lighting Design industry.

Cld.global
This is the organization that administers the Certified Lighting Designer examination. They have information about the exam on their website.

American Association of Community Theatre
This is a great organization for those looking to build a career in Theatrical Lighting Design.