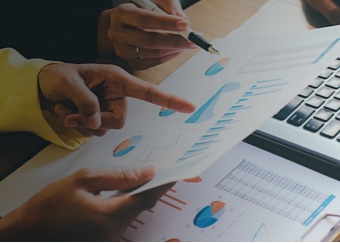 All job interviews require preparation. If the position you are pursuing requires analyzing data and researching historical trends, then a successful financial analyst job interview means your job begins before you even meet with a potential employer. The banking and investment sectors have largely recovered since the recession, but their purging of analysts during the downturn means competition for top jobs remains fierce. Worse, the role of analysts in the coming decade is increasingly opaque.

Earlier this year, The New York Times profiled the owner of up-and-coming software firm, Kensho. Firms like client-investor Goldman Sachs Group Inc. utilize Daniel Nadler's software to determine the impact of world events on asset prices. Work once performed by highly paid analysts laboring for dozens of hours can now be completed in about the same time as a Wikipedia search. ‘‘I'm assuming that the majority of those people over a five-to-10-year horizon are not going to be replaced by other people,'' Nadler admitted to the Times. ‘‘In 10 years Goldman Sachs will be significantly smaller by head count than it is today.''

Yet the news for aspiring financial analysts is not completely dire. In the near term, the U.S. Bureau of Labor Statistics predicts a 12% increase in financial analysts' employment through 2024 with a median salary of $80,310. The key to landing a job is using focused preparation to master financial analyst interview questions. The best way to avoid hearing a "No," is to utilize the four "Knows."

Why do you even want to be a financial analyst? Although simple, this is one of the more common entry-level interview questions asked of candidates. You should have a clear, concise answer prepared. The good news is that firms are actually expanding their analyst recruitment.

Russell Horwitz, co-chief operating officer of Goldman's securities division, told The Wall Street Journal this June that limiting financial analyst interviews to the Ivies meant attracting candidates who often quit within two years. If recruiters are "going to invest the time to attract people, they want to make sure they're getting a higher likelihood of people being here longer and having a strong career. Having access to a broader funnel of candidates, and thinking differently about experience and background, is just a better investment."

You can expect that at least one of the financial analyst interview questions to deal with your knowledge of your potential employer. With so much data available, there really isn't an excuse for not acquiring a deep awareness of what the company does. When Financial Analyst Peter Grisby discusses how he solved a challenge at work, he emphasizes the relationships he cultivated with account managers. Financial analyst interview questions often focus on overcoming challenges. If you lack a background in the sector, you can illustrate ways you surmounted obstacles in other situations.

Even if your degree isn't in finance, becoming an analyst isn't an impossible dream. Networking is a must. One person who succeeded, leveraged a fairly high-up college contact at a hybrid banking firm into an interview. "During my interview process, rather than getting technical questions on accounting and finance, I was asked to provide sample work product showing my writing, presentation, and basic modeling abilities, " explained the candidate who had been working at a tech firm. " I think anyone applying to boutiques and hybrid firms should know that - especially if you have some full-time work experience, showing them what you can do (literally) plays a big role in getting offers." The take away is even as top tier firms expand their financial analyst interview parameters, you should expand your own search to include smaller companies and those that combine sectors. Most of all, you have to do your due diligence.

Entry-level jobs attract a heartier mix of candidates than in years past. Economic uncertainty forced newly minted college grads to cobble together a mix of internships and short-term contract jobs. With an improving job market, they are now actively pursuing full-time employment. Maybe your own experience is less substantial or outside of the sector. This means as you prepare for your financial analyst interview, you should expect to compete against others who may be older and more experienced. If your own background is less substantive, you'll want to be able to cite analytical work you performed in non-work settings. Perhaps you were a treasurer at a school organization or assisted a nonprofit. Maybe you've been analyzing stocks in your own portfolio. Even if other interviewees have more experience, detailed answers and a passion for the sector can help you prevail. Yet all the research in the world won't prepare you for every possible financial analyst interview questions.

The way to face the unexpected is by being as comfortable as possible with typical financial analyst interview questions including ones like these from website Investopedia: "What programs would you use to prepare illustrated technical reports with graphs, spreadsheets or charts?" and "Explain financial modeling." Even entry-level interview questions can be esoteric. Alphabet Inc. is famous for its challenging queries including this one a financial analyst submitted to website Glassdoor. "Pretend 1 percent of the population has a disease. You have a test that determines if you have that disease, but it's only 80% accurate and 20% of the time you get a false positive, how likely is it you have the disease."

To best prepare, you may want to take a cue from actors who use scene partners prior to auditions. Have a friend quiz you with a variety of financial analyst interview questions.