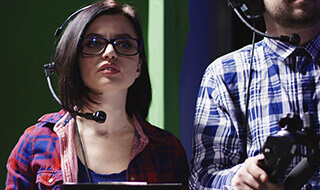 How to Become a
Script Supervisor

Are you interested in a job that combines both creative and technical skills and requires working in the film industry? You might be a candidate for becoming a Script Supervisor. Find out more about the education, training requirements and skills needed for this position in the following article.

What Does a Script Supervisor Do?

It is up to a Script Supervisor to oversee scene continuity and the integration of picture and sound during the filming of a movie or TV show. They are involved in the production and post-production stages of filmmaking. They also manage any changes to a script and ensure that the script is being adhered to during shooting. A Script Supervisor works closely with directors, camera operators, cinematographers, photographers and film editors. They work mainly for film studios or production companies, but could also be hired on a contractual freelance basis.

A Script Supervisor should have strong visual skills and have the ability to translate the written word into a visual medium. They should be detail-oriented and possess strong verbal and written communication skills, as they are responsible for conveying directions in the script to other personnel on a set and to generate reports. They should be comfortable working closely with others and have the ability to meet tight deadlines.

Other key Script Supervisor skills include:

How Do You Become a Script Supervisor

There are no formal education requirements for those seeking to become a Script Supervisor. It could be helpful to have taken scriptwriting or film production courses at the college level. Some of these types of courses might be offered in seminars or in-person or online workshops. While not needed, a 2- or 4-year degree in film studies, film production, filmmaking, communications or media arts could be beneficial. These types of programs can include an internship, which is helpful to gain work experience and possibly lead to an apprenticeship opportunity.

In some cases, those seeking to become a Script Supervisor apprentice with an experienced professional and receive training on the job. This hands-on experience will expose them to working with cameras and editing equipment and become familiar with the roles and responsibilities of others on a production set whom they will interact with on a daily basis.

With many film studios and production companies situated in Los Angeles or New York, it could be necessary for those interested in becoming Script Supervisors to live in one of these areas. However, smaller studios and companies might be found in other major cities and might offer better prospects to those just beginning their career as a Script Supervisor.

Job growth rates for Script Supervisors can be linked to that of producers and directors, both of whom Script Supervisors work closely with. According to the Bureau of Labor Statistics (BLS), employment for these occupations is projected to grow by 9 percent between 2014 and 2024 as expanding cable channel offerings and availability of online movies and shows is increasing the need for filmmaking professionals. The field, however, is competitive and experience provides job candidates with the best prospects.

Once your resume is ready, search online for Script Supervisor job opportunities. Draw on your network of professionals you might have met while gaining experience through an internship or apprenticeship or attending a film school or classes.

Insights from a Script Supervisor

To get more details about becoming and working as a Script Supervisor, we spoke with Roe Moore, an award-winning producer, actor and Script Supervisor. Following is our question-and-answer session with Ms. Moore.

What is the common career path for a Script Supervisor?

A Script Supervisor is a department of one, so there isn't necessarily a ladder to climb or a "seniority."  Usually one becomes a Script Supervisor after working as a production assistant or as a former editor. Occasionally, those working in another department find delight in continuity and make the change. In the early days of filmmaking, an up-and-coming director would work as a Script Supervisor to learn to direct. Nowadays, there are career Script Supervisors as well as those who do jump up to the director's chair.

What should someone consider before becoming a Script Supervisor?

When considering becoming a Script Supervisor, I would suggest considering one's skill level in organization, detail-oriented, and a capacity to have a powerful memory. The Script Supervisor is the on-set representative for the post-production team. They are the last line of defense before the cameras roll to catch any errors like missing props and/or continuity errors. They are responsible to review what is being recorded to ensure that dialogue lines are said correctly, that movements matched what was discussed in rehearsal, and if the take can 'cut' with any other footage or coverage for the scene. Because of this, knowledge in other areas of production is highly suggested because our position interacts with every other department. If one is familiar with the other departments, the Script Supervisor can then collaborate to find smart decisions in the event an error happens or additional support is needed.

A powerful memory is important because one has to remember (or notate) the movements of multiple things at a time while the camera records the take. After each take, the actors and props reset to their original positions and the Script Supervisor is the authority on those positions. In addition, the Script Supervisor has to know the script better than anyone else on set. This is to field any changes that could affect the story line as a whole or for a single character and determine if the change is something that can be done. More often than not, the director/producer/writer may know that in scene 2, the character gets punched. But they decide to remove the punch from the script, making the dialogue in scene 3 about the punch irrelevant and changes the story. The Script Supervisor has to be on top of the script to catch these errors before they are put on film.

What type of person excels at this job?

The type of person who excels at this is strong with details, is organized, experienced in record keeping, and is self-motivated. A majority of our job deals with maintaining the continuity of a script as well as what has been filmed. This means keeping track of props, actor movements, wardrobe, dialogue and more. In addition, there is a lot of record-keeping for the production and the post-production teams. The Script Supervisor is responsible to take note for every take and provide reports to the teams regarding information like camera rolls, audio rolls, script coverage, editorial log and more.  The accuracy of these reports is crucial for these departments to do their jobs well.

What are some of the most important skills - hard and soft - for Script Supervisors to have?

Most of the bare minimum skills needed have been stated above. Additional skills that are helpful would include: the ability to multitask; be professional and prepared; and be a team player. Because we deal with so many working parts on set, a Script Supervisor is known as the point of contact for the majority of the departments. To be able to multitask your own workflow while working with these departments on the next setup is invaluable. As with every job, show up on time (or early) and be prepared. It will make you the most effective person when other departments are shorthanded. Being a team player is essential. When you're on a production or on set, there's one common goal: to create. If there is a way that you can add value while carrying your weight, it helps everyone look good.

What do you find to be the most rewarding aspect of being a Script Supervisor?

One of the main reasons why I became a Script Supervisor is because I have an incredible interest in all aspects of filmmaking and through working as a Script Supervisor, I get to work with each department to create the best film possible. I get to be a collaborator and play a part in the decision-making for big productions. I have OCD and doing this job allows me to place that energy where it is appreciated.

How Much Do Script Supervisors Get Paid?

The salary of a Script Supervisor in the United States can vary. Some might belong to a union, such as the International Alliance of Theatrical Stage Employees (IATSE),and would thus be paid contractual rates as set by the union. The average salary for a Script Supervisor is $100,556.

Below you will find several resources that can help you understand more about what Script Supervisors do and whether this career is right for you.

Tales From the Scripty
A blog providing a personal look at the life of a Script Supervisor. Also includes an overview of the occupation titled 'Script Supervision 101'.

Script Supervisor
This blog features news, interviews and other information relating to the field of script supervision.

Filmmaker Magazine
An online publication providing news, interviews and more with relevant professionals in the field of filmmaking, including directors, producers, writers and Script Supervisors.

Script Supervising and Film Continuity
A classic look at the career of a Script Supervisor, covering this profession's functions, methodologies and craft.

Beyond Continuity: Script Supervision for the Modern Filmmaker 1st Edition
A professional Script Supervisor guides you through the demands and responsibilities of this career, from training to working full-time in the field.